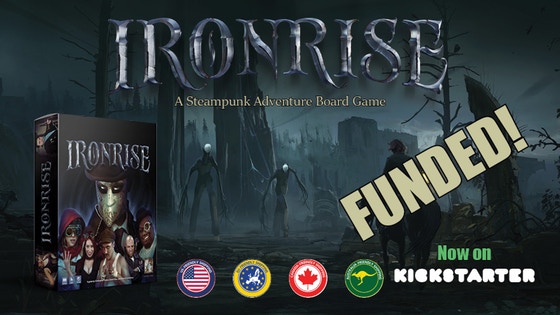 Ironrise - A Steampunk Adventure Board Game

A steampunk role-playing adventure board game.

Latest Updates from Our Project:

Well, we actually did get some more backers over the weekend, which we're happy about, and we're currently sitting just under 54% funded 6 days in. We've got a couple of points of exposure happening this week, which we think will help keep this thing chugging along.

I thought now might be a good time to touch on the game play of Ironrise itself. With a Kickstarter campaign, there's always this balance between trying to dazzle people with artwork/components, and explaining what the actual game itself is, and how it plays.

With a big game like Ironrise, it's especially challenging to figure out where that balance should be - we know we only get a few seconds of attention from most clicks, so we need to hit you with images, but we also need to have a full set of information available for anyone who really wants to get into the guts of what they're backing.

There are links now on the main page, but to amalgamate the game-play relevant information:

1) Our entry on BoardGameGeek, which is sort of the master archive of all things board game, contains a ratings/review page, which admittedly should always be taken with a grain of salt for a Kickstarter game (not a lot of data, some of those reviews are people we know). There's also a "play testimonial" entry on the forum attached to our game. This is something I appreciate, as a third party look at the game is so much more useful than trying to write about one's own project.

2) We have a play-through video that we did out of the OneShot studio here in Chicago. We didn't stack anything, just sat down with some people and played a game of Ironrise. If you've got the time, I'd say it does a pretty good job of acclimating someone to the ins and outs of how the game works:

3) If you're in or around Chicago, we've got prototypes and time, there's a good possibility we could demo the game for you sometime if you reach out to us. Feel free to shoot us an e-mail at ironrisegames@gmail.com

Thanks again for your time and support!

Thanks again for supporting our project. This will be the last update for this week, to resume on Monday, and then every few days after that. I don't want to pepper your inboxes with too much, so unless something big/crazy happens, these will be more infrequent going forwards. Please pose any questions you may have in the comments section, and I'll get right back to you there.

It's early afternoon Friday for us, on the first week of our campaign, and we're sitting a couple backers away from 50% funded. This is a strong indicator we're on track to succeed, but as always, anything you can do to spread the word and get eyes on this project is greatly appreciated.

I thought now might be a good time to give some background on the Ironrise board game, for any who might be interested in the history of its development.

"Ironrise" started as a D&D style home-brew role playing campaign designed by one of the co-creators, Chris Dravus. Chris has been building worlds and game mastering for . . . decades? Wow. Anyway, he created a dark, sinister world for our characters to explore and adventure called "Spirel." Ironrise itself was the name of the campaign, as well as the capital city in this world. Myself (Ed) and Danny - the other two co-creators of Ironrise - were players in several seasons of Ironrise, and enjoyed it immensely.

A grand library of write-ups and world descriptions began to amass, with Chris as the chief author and lore-keeper of all things Ironrise related. Many of the characters in the board game are player characters from our RP campaign, played by several friends of ours, and many more are antagonists from it. Recently, we've been able to upload and administer this world setting by way of World Anvil, which plays host to many a tabletop campaign's setting.

I (Ed) had been kicking around a few mechanics I had not seen in any games I'd played, and in April of 2014 had asked Danny if he would like to try to develop a board game based on those basic functions. He excitedly agreed, and we decided to ask Chris if we could use his world as a setting and narrative drive for that game. Chris agreed to let us use his world, and indicated he'd like to jump in on this with us. Thus, 4 years ago, a partnership was formed.

While the three of us are the core partnership behind Ironrise Games, LLC, and the developers of Ironrise board game project, our community of friends and play testers has been invaluable in taking a game from concept to completion. Several years in the First Exposure Playtest hall at GenCon, and hundreds of full as well as focused tests and demos, along with a lot of reworking and polish ultimately render what we've put forward in this campaign.

We've got a lot of pride in how far we've come in four years, and can't wait to get our game to you.

Our second day is about to wrap up, and we've made some modest progress. The drop-off in rate of backers coming to the project was expected, as we've been led to understand it's part of the natural life of a Kickstarter campaign. However, we are still on track to fund, and I'm looking forward to us getting there. Any help in spreading the word is appreciated, naturally.

Oh Canada, your shipping was too high. We got a comment on the high price of Canadian shipping, which was odd given how close our neighbors are. Well, to make a long story short (full story can be seen in the comments section), the prior price of $30 reflected us taking on $8 off a total cost of shipping a package our size/weight to Canada of $38 from the US. Which is kinda nuts, given that most Canadians are closer to what we hope to be our main warehouse/fulfillment center than most Americans.

If we were guaranteed a lot of Canadian backers, we'd be able to ship from a Canadian warehouse, bringing the price to ~$15. So it is 38, or 15 dollars, depending on interest. We took $30 to be eating some of the cost for that risk. Well friends, we've readjusted that risk to $20. At this cost, we're covering $18 (~1/2 the cost) in the most likely scenario where we have a modest number of Canadian backers. However, you're covering $5 over the cheapest it might be in the (unlikely) event we have enough to warehouse/ship internally in Canada. Sound fair? We felt that justified a "Canada Friendly" shipping icon on our cost breakdown, but please let us know if you feel differently.

I don't think I can make the change retroactively to pledges already made, nor can I alter shipping costs on the entry in place. However, there is now a new reward tier, "Canada Special", which will use this updated shipping price. If you're Canadian and already pledged, you should be able to switch your pledge over for the cheaper shipping price. If you're Canadian and on the fence, we hope this helps bring you over to our side.

We'd like to extend our utmost gratitude to everyone who has supported us so far. We're at 24 hours live, and just over 40% funded! From what we are led to believe, projects that achieve 30% or higher on their first day have a decent shot at making it.

We have an ad campaign kicking in at BoardGameGeek, as well as our Facebook ad which will continue to run. However, word of mouth is invaluable, and we'd greatly appreciate any help from our backers to get this product out there.

Feel free to post any questions you may have in the comments section, and we'll be sure to do our best to answer them.